The Shamanism is not a religion or a way of life. It is a set of beliefs dictated by a holistic and animistic view of the world. Present in Mongolia since the dawn of time, shamanism aims to find the balance between man and the environment in which he lives. Since it is not easy to explain, one tends to see shamanism as a form of witchcraft. Yet, shamans have unsuspected powers that you will be surprised if you go out to meet them! We explain everything you need to know about shamanism in Mongolia, the definition and origins, shamanism and Buddhism, roles and the rituals of shamans.

Shamanism is one of the oldest spiritual practices in the world. It is not based on faith in a God but rather on animism, a belief that attributes a soul and a spirit to all living beings and all the elements that make up nature. In this sense, shamanism correlates several worlds: the one that is visible and perceptible and the ones we do not see, namely the spirit world, the world of purgatory, the world of water and the world of the guardians of nature.

There is no doctrine or scripture in shamanism. Shamans practice a certain number of rituals (see Part 7) to make contact with higher entities as well as spirits. This may concern the souls of animals, the dead, ancestors of the people, the souls of the sick to heal, or unborn children. 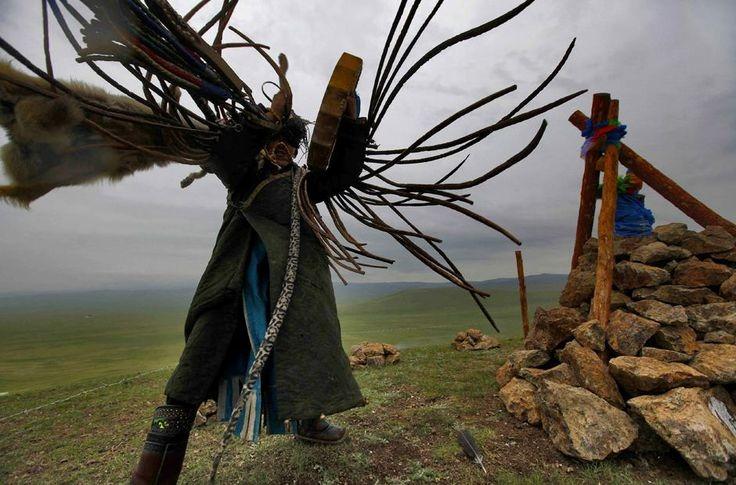 Shamanism originated in Siberia and more precisely in the Altai Mountains with the Tungus tribe. In Mongolia, shamanism is the oldest belief of the people. It was declared the official religion of the Mongol Empire in the 13th century. The Mongolians practiced mainly tengrism, a form of polytheistic animist shamanism stemming from ancient Turkish religions, was popularized in Mongolia through Genghis Khan, founder of the Mongol Empire. But Mongolian shamanism also includes other forms such as yellow shamanism, influenced by Tibetan Buddhism (see Part 3) or shamanism black or white.

Over time, Mongolian shamanism has never ceased to confront the Buddhist traditions. Not to mention the arrival of communism that had established their traditions and religions. Before 1995, shamans who practiced their rituals were liable to imprisonment. It is only at the end of communism that shamanism regains its momentum and continues to develop under several influences by other religions.

Today, shamanism continues to be practiced in Mongolia and is found mostly in the daily life of ethnic groups of the Darkhads, Buryat Khotgoid, Uriankhais, and Tsaatans. Shamanism is also practiced by many peoples all over the world, from Asia to Africa, America, or Australia! 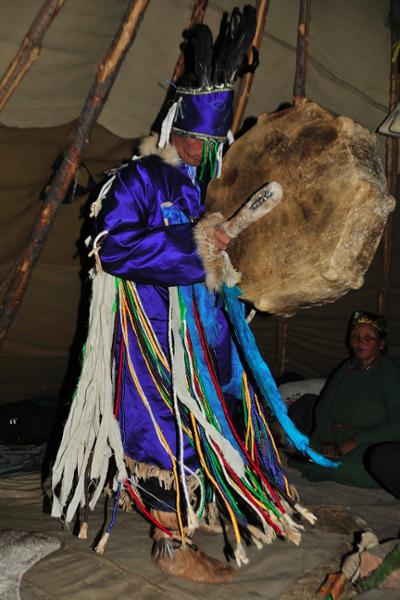 Shamanism and Buddhism have been competing and complementing each other more than once in Mongolia. And although Buddhism is the official religion today, it’s not always been recognized by the people. The Mongols have been following traditional shamanistic practices for a long time, even when Buddhism was a state religion. So much, that a form of shamanism and Buddhist influence has been created, called yellow shamanism! This refers to the yellow caps (Gelugpa) of Tibetan Buddhism and is inspired by Buddhist practices. This type of shamanism is still practiced today by Khalkha Mongolians. 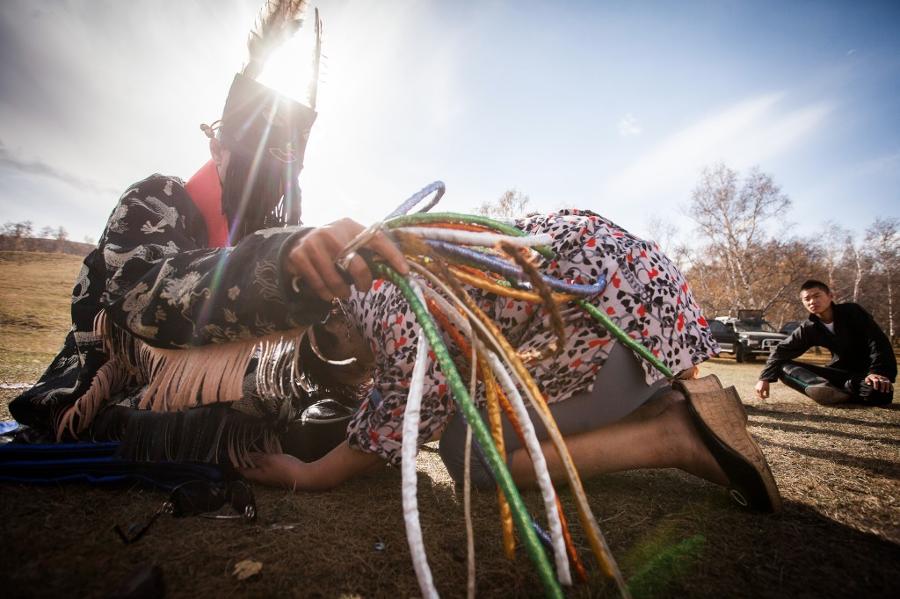 The shamans are people who were chosen by the spirits or inheritance for their curative powers. Becoming a shaman cannot be taught or learned. For the shaman, shamanism is not a choice of life, it is a gift given by nature to ensure harmony between man and the world. This is why the shaman cannot turn away from his missions and must take his role very seriously. 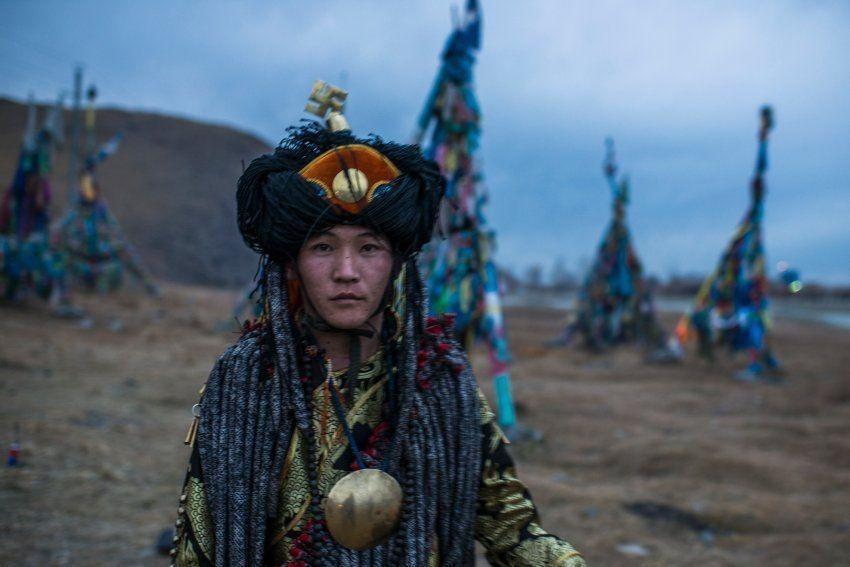 As we mentioned before, you do not become a shaman, you are a shaman. The selection of the shaman is realized by a process known as the "touch of the spirit." To discover his powers, the shaman must know and face the initiatory illness. The symptoms are described as being conventional and more or less expected and provoked.

During the ceremony, the individual goes into a trance. If he faints, this indicates his entry into the shamanism world. At this moment, the ancestors take the soul of the future shaman to get instructed. The shaman's disease can last for a few days or even years. It is customary to believe that if the candidate designated by the spirits does not become a shaman after having gone through this initiatory disease, he risks dying. This is to say how much he plays a determining role within the Mongolian people of shamanic beliefs.

6. The role of shamans 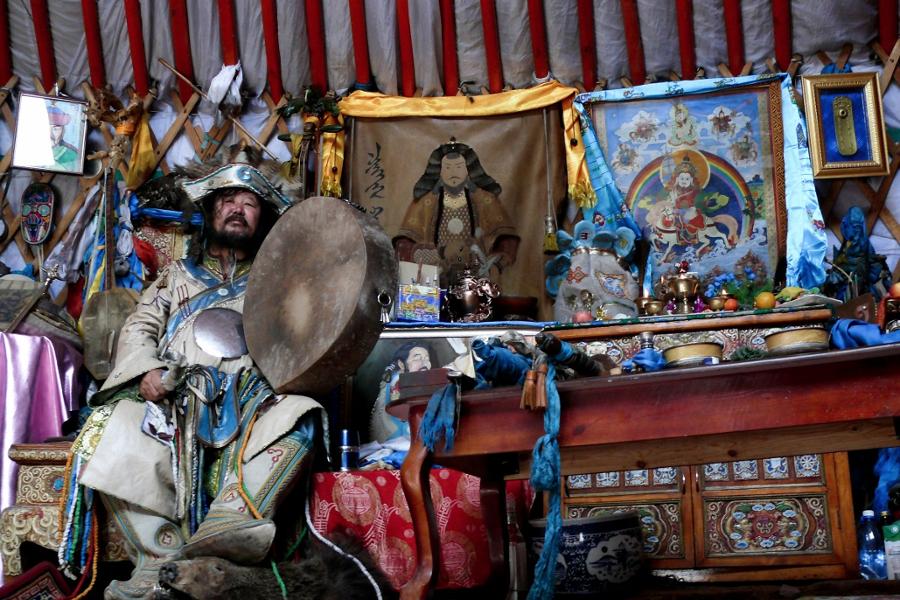 In Mongolia, they are called relay runners because they are the intermediaries between humans and other worlds. But beyond this function, shamans play a very important role in the social functioning of a people, a community, or a society. They are guides and spiritual masters, healers, and protectors that everyone listens to and respects on a daily basis. They will heal the body and soul, name the children, accompany the soul of the dead, and communicate with nature to bring rain. Of course, rituals depend on one region to another and all shamans can customize them. In order to communicate with spirits, they can practice various forms of rituals to enter into a trance, most of the time, it's a rhythmic dance with drum beats. Others sing and some consume alcohol, grass, and other hallucinogenic plants during the ritual to open perceptions. Drum travel is characteristic of North Asian shamanism. So, Mongolian shamans use the drums to reach the state of trance. That's why in the Evenki language (Tungus language of Mongolia), the word shama translates as "dance, stir, move, jump." 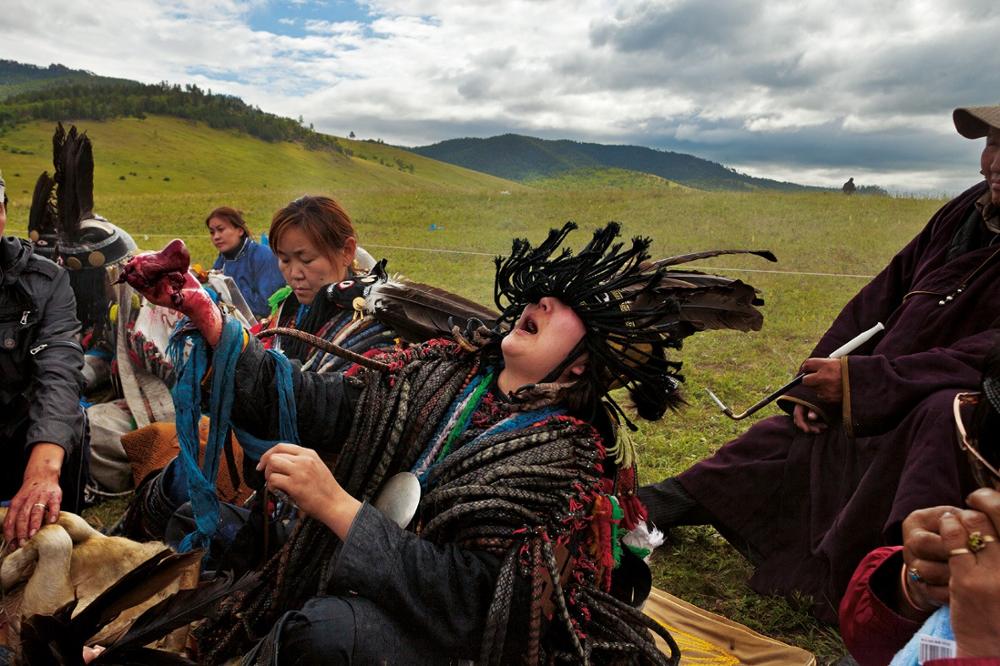 To communicate with spirits, the shaman must reach a state of consciousness. In other words, the shaman must put himself in a particular psycho-physiological state that allows him to cross the boundaries of rational consciousness and communicate with other worlds. Most of the time, the state of trance is represented by a bodily expression whose tremors are suggestive of the presence of spirit(s) in the body of the shaman.

The tools used to go into a trance are numerous. In Mongolia, the drum is a sacred object since it allows the shaman to come into contact with the spirits. Moreover, the shamanic drum is considered a Mongolian national treasure. It is strictly forbidden to leave the ground with this object of great symbolic value. In addition to the drum, the shaman has other accessories such as the Jew's harp, a mirror, pebbles (41 in number), or small dolls made of cloth.

When a shaman goes into a trance, the spirits are manifested. We often hear that they take the form of wild animals such as a wolf, an owl, a bear, etc. An intimate conversation then takes place between the shaman and the spirits. The shaman can offer offerings to the spirits they meet and when the ritual ends, he is careful to share the messages and the answers of the spirits to the questions of the people. In a state of trance, the shaman suffers a loss of the notion of space and time . He has visions and may feel a decrease in the perception of pain and conversely, an increase in physical forces. A trance can be so violent that the shaman must be accompanied by an assistant who intervenes when needed.

To discover the secrets and mysteries of shamanic rituals, nothing like an immersion in the Mongol tribes. Enjoy a trip to Mongolia to meet some people with shaman beliefs. You can stay in the steppes accompanied by a shaman and his assistant so you can learn the rituals and initiate a shamanic meditation. For a timeless adventure, ride the taiga to reach the Tsaatan camps to meet a Shaman with out tour "Meeting with the Dukhans" https://www.mongolia-trips.com/tour/meeting-dukhans

One thing is certain, if you meet a real shaman, you will be marked forever by this experience ...