Meeting the Kazakh Falconers in Mongolia

In the middle of the mountains, glaciers, and steppes of the Altai, in the far west of Mongolia, between China, Russia, and the border of Kazakhstan, nestles the small town of Olgii. Mainly Muslim population rocked by Kazakh culture inhabits this multiethnic site. This community perpetuates an ancestral tradition: eagle hunting.

We will take you to Mongolian eagle breeders to learn more about these people and this centuries-old activity.

Eagle hunting: a way of life handed down from father to son The Mongolian Kazakhs settled in the Altai in the late 17th century. Since their migration, they have never neglected their traditions, including eagle hunting. Successive generations have made a point of perpetuating this activity and passing on their know-how. Thus, over the ages, these people became masters in the art of taming the golden eagle.

The principles of eagle hunting

Eagle hunting is an art in its own right. It takes years of learning and experience to carry out this task in due form. Generally, the hunt takes place on horseback:

• The hunter gets on his horse and then places his eagle on his forearm with a protective glove.

• The two protagonists go out into the wild and hunt game (foxes in most cases).

• When the eagle spots a prey, it moves and his master releases him so that he can chase it.

• Once the game is caught, the hunter approaches quickly and gives a piece of raw meat to his faithful companion. This allows the bird to be distracted to detach its claws from the prey so that the fur of the hunted animal is not damaged.

Some Kazakh eagles hunt in groups. Their eagles work as a team to track down the same prey. In this case, the game is a bigger animal, like the wolf.

The training of the golden eagle Taming the Golden Eagle is a difficult task. It takes years of experience and a lot of patience to complete this operation.

Usually, to facilitate training, the eagle is captured in its nest, at the age of about 2 months, when it does not know how to fly or walk. The bird is then fed daily with raw meat. Spaces between meals then increase as dressage progresses.

During his training, the eagle first learns to keep his balance on the arm of his master and react to his calls. Then he practices hunting by tracking a lure attached to the rear a horse, such a moving prey. With each success, he is rewarded with raw meat. After the training, the young raptor must depend on his master for food. If he regains his hunting instinct, the eagle will return to the wild.

• The eagles prefer to tame female eagles because they are more ferocious and imposing. In adulthood, their wingspan can reach 2.20 m, for a weight of 10 kg.

• Once trained, the eagle is fed only at the time of the hunt, when it catches prey.

• After 8 to 10 years of hunting, the eagle is released into the wild. He can live for nearly 20 years in the wild and find a partner to breed.

The Eagles Festival in Mongolian Altai 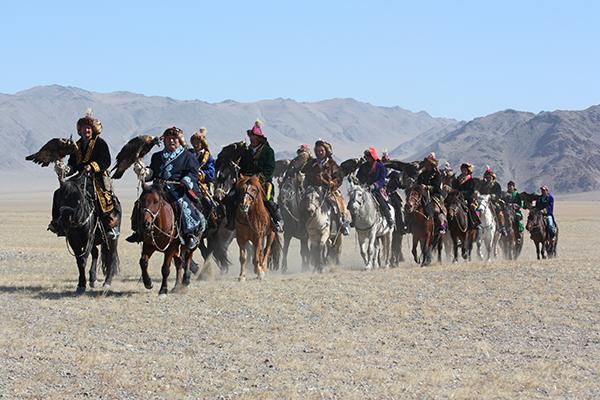 During the first weekend of October, the eagles gather in the small town of Olgii to celebrate the prestigious Festival des Aigles which is spread over 2 days. They come from several countries: Mongolia, Russia, Kazakhstan, etc.

During this event, various activities are scheduled:

• Equestrian games to show the skill and feats of hunters

The Eagles Festival is also celebrated every year in the mountains of Sagsaï, around mid-September.

Go on a tour to meet the Altai's eagles

Horseback Mongolia offers a 14-day trip to meet the Kazakh people. We will take you to the province of Bayan Olgii among Kazakh nomadic families where you will be hosted. You will be able to attend the most important festival of eagles and try to hunt eagles on horseback accompanied by a falconer. This tour guarantees you a trip to Mongolia unique and out of the ordinary.

Our Tour: The Eagles Festival